South Korea Having a Bout with Liberalism that Will Affect America 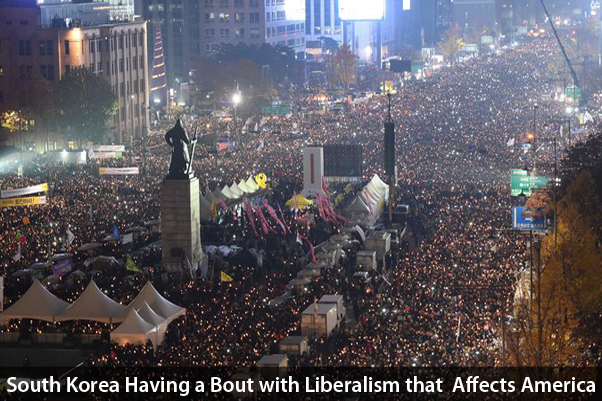 LIBERALISM HAS ENTERED A PERIOD OF GLOBAL decline. Since it inception, Newera has reported on the eclipse of liberalism occurring in places diverse as Poland, Hungary, Slovakia, France, Philippines, Taiwan, Russia, Nigeria, Bulgaria, Moldova et al; now it appears that South Korea is following the global trend, but in a less obvious way. For decades Korean students (students steeped in the Confucian tradition of elevating scholars as defenders of morality) have risen against authoritarian rule and self-serving elites, elites who, in the name of private property and individualism, have contributed to the dehumanization of the human person and to economic injustice.  Together, these phenomena have contributed to the rise of liberal parties committed to freedom and equality resulting in the eventual acceptance and toleration of immoral behaviors that were once thought criminal.  As a result of excessive toleration, liberal education and a broad media campaign supported by One World Globalists, just about every moral aberration is now being claimed as a human right.  Recent events, however, indicate that change is taking place in the Korean atmosphere as it is elsewhere around the globe as an increasing number of people are turning toward the right and voting conservative. Over a million people gathered in Gwanghwamun Square and in cities throughout South Korea in late November, 2016 calling for President Park Geun-hye (the daughter of former president Park Chung-hee) to retire from office. Park’s approval rating plummeted from around 90% to a new low of 14% following reports that Park’s long-time confidant and cult leader, non-appointed and non-elected, Choi Soon-sil has been charged with fraud and coercion for using spiritual manipulation that enabled her to use the relationship she cultivated with President Park to garner over $60 million in donations for her foundations. Some have referred to Choi as “Rasputin”, as a covert  “puppet master” who is the real power behind “the throne.”

Choi Soon-sil’s father, Choi Tae-min was a Christian cult leader who was married six times before his death in 1994. Choi established the “Church of Eternal Life” and referred to himself as the “Maitreya”, a Future Buddha, a claim that he used to ingratiate himself to Park Geun-hye following her mother’s death in 1974 after which she became the First Lady of South Korea. In that year, Tae-min presented himself to Park and said that her mother had appeared to him in a dream and asked him to assist her daughter.

Like his daughter, Choi Soon-sil (who succeeded her father as leader of the Eternal Life Church), Choi Tae-min used his relationship with Park to bribe both businessmen and government officials. According to WikiLeaks, the American Embassy in Seoul reported that

Choi “had complete control over Park’s body and soul during her formative years and that his children accumulated enormous wealth as a result.”

Choi Soon-sil, picked up where her father left off. CNN describes Soon-sil as “a deviously persuasive figure outside government”, a persuasive figure who used her influence to tell the president how to run the country, “in exchange for favors”.

Consequently, up to 1.7 million people gathered in Seoul in sight of the presidential residence to demand the president’s expulsion. According to the Washington Post,

“Park is accused of letting a longtime friend with no official government role, Choi Soon-sil, see classified documents and improperly influence government actions. In turn, Choi has been charged with using her relationship with the president to shake down the nation’s biggest companies for donations to her companies, personally enriching herself.”

According to Forbes, Koreans are not only upset  with Park’s connections with the Church of Eternal Life but also because of the perception she cultivated of being above corruption. Park, elected in 2012 as South Korea’s first female leader, was purported to be from a new mold, expected to put her country before personal gain, a true public servant.

“Part of her appeal is the perception that she is not corrupt,” says Trinh Nguyen, senior economist with French investment bank Natixis. “Koreans thought that given that she had no family and was estranged from her siblings that her dedication to Korea’s future would be total.”

After assuming office on Feb 25, 2013, her first mission as Head of State was a trip to the US to meet President Barack Obama and his Secretary of State John Kerry. President Park predictably urged cooperative S. Korean-American efforts to contain North Korea and accepted the presence of 20,000+ US troops on South Korean soil. Park expressed her wish that beyond containment of North Korea, that the US-South Korean partisanship be “upgraded from a comprehensive strategic alliance to a global partnership.”  The parties agreed to a joint-statement pledging to establish a committee charged with communications and information technology and to pursue a comprehensive energy plan to assure continued coadjuvancy and on-going symbiotic growth of the two economies.

Nonetheless, on December 9, 2016, the South Korean Parliament voted to impeach their president on charges of corruption, thereby de facto terminating her executive powers. Since then, Prime Minister Hwang Kyo-ahn has been invested with those powers as Acting President. This leaves the door wide-open to re-evaluate South Korea’s commitment to liberal trade, to its pro-US foreign policy and South Korea’s 2013 commitment to pursue a global partnership with the USA. Thus, according to USA Today:

“The pro-U.S. foreign policy of South Korean President Park Geun Hye is at risk now that she appears to be on her way out over a growing corruption scandal.”

Several of the at-risk trade and foreign policies validated by the Obama Administration include:

Following North Korea’s nuclear test on September 9, 2016, South Korea formulated a hard-line policy with its northern neighbor as well as rethought its relations with China and Japan. Park’s new approach was congruent with President Obama’s plan to treat North Korea as a pariah state and thereby slap it with additional economic sanctions. President Obama said that the imposition of new sanctions, on top of already existing sanctions, demonstrate to North Korea that there are “consequences to its unlawful and dangerous actions.” Now, however, according to John Delury, professor of International Affairs as Yonsei University:

“With the equally sudden demise of the president (Park), it puts into question the new hard-line policy.”

For example, following the North Korean missile launch, President Park ordered South Korean military units to withdraw from the Kaesong Industrial Complex, a cooperative venture reliant on South Korean expertise and yet provides significant funds to the North.  When Park leaves office, Delury believes that “doves” in the administration would reopen the joint-project. His prognosis is seconded by past US Ambassador to S. Korea, Kathleen Stephens, who recently indicated that parties in opposition to the President’s party are likely to drop Park’s hard-line stance and seek a rapprochement with Pyongyang.

It would be “a major project” to reopen relations with the North, but options would include a resumption of food and humanitarian aid, plus family reunions that took place in past years.

As USA Today points out:

“Such voices have already spoken out. Chung-in Moon, a foreign affairs adviser to South Korea’s opposition, in September called for suspending joint military exercises with the United States and for encouraging dialogue with the North. Such a move by South Korea would be seen as a step toward rejecting the U.S. security umbrella in the region that has existed since the 1950s, said Yun Sun, an analyst at the Stimson Center, a Washington think tank.

As a further consequence of N. Korea’s nuclear test, Park permitted the United States to deploy THAAD (a $900 million Terminal High Altitude Area Defense) missile system, and to accept a further deployment of US troops in South Korea. China, South Korea’s major trading partner, interpreted the deployment as a threat to its own missiles and aircraft. The $900 bill has been picked up by the United States, but President Trump has indicated that he wants US allies to pay their fair share.  On top of that, there are political forces in S. Korea who would like to improve relations with China; Parks removal provides them with an opportunity.

President Trump referred to the Obama brokered US-Korea Trade Agreement as a  “job-killing trade deal.”  By “job-killing”, Trump was referring to US jobs; Korea, like Japan and China, is the primary beneficiary, something Trump has vowed to rectify.  If S. Korea really wants to keep the agreement in tact, it will have to make concessions to the United States or find alternative trade with China and Europe, something made increasingly possible with the ongoing construction of the “Silk Road Project” linking Asia to Europe. As it stands right now, S. Korea’s trade with China exceeds its trade with the USA. In fact, trade between S. Korea and China is greater than its combined trade with both the US and Japan!

South Korea continues to improve its economic relations with China; the two nations have joined the newly created Asian Infrastructure Investment Bank (AIIB). The AIIB along with BRICS is viewed by many as an alternative funding for infrastructure projects traditionally handled by the IMF and World Bank which have strapped debtor nations with neo-liberal fiscal and monetary requirements detrimental to both their indigenous culture and their economic growth, requirements not imposed by the AIIB.

The Real issue here is how Park’s removal affects relations between the United States and China and how it contributes to ongoing American-Korean relations and the exportation of neo-liberal economic and social policies with US satellites throughout Asia, satellites who, like the Philippines and Malaysia, have indicated a desire to increase trade relations (and military drills) with China and Russia. S. Korea desires a continued US alliance; however, S. Korea also has a significant and growing relationship with China. The question is which one will predominate as Southeast Asian nations appear to be moving toward more local and regional patterns of association.

Is President Trump pushing America’s allies in SE Asia into the Chines camp and into closer regional cooperation among each other? Is the ouster of Parks a signal of an ongoing Asian shift toward increased regional autonomy, toward new trade opportunities with China, Russia and Europe?  Newera believes that these events are occurring but not as a result of President Trump’s policies or executive agenda for America. No, these events were in motion before Trump ever assumed office and they will continue in motion as they are regularly propelled forward by unforeseen and unexpected events such as the ouster of South Koran President President Park Geun Hye. These are not events or knee-jerk reactions to anything Mr. Trump is doing or has done. Rather, they are events indicative of something happening to Mr. Trump and to America, something unforeseen by any geopolitical forecaster as more and more nations (either consciously or inadvertently) move to shake off the divisive economic, political, and social aspects of global liberalism and move toward an “Era of Peace”.

The United States must wake up to the fact  or find itself on the back-side of history as the nations move on without it. The US can maintain a global leadership position if it slowly, yet consistently, relinquishes its liberal economic-political-cultural agenda and sincerely reaches out to developing nations with disinterested helping hands as well as extending cooperative hands toward Russia and Europe in the mutual battle against terrorism. If the US gives up its liberal policy of forced regime change, learns to respect the sovereign political rights of other nations, puts a halt to its liberal sexual agenda, and cooperates for the economic global common-good of all nations, if it can do these things, the United Sates will be admired as a peace-maker and perhaps regain its status as a “great nation under God.”